Last Updated on 5 months by DiaryNiGracia

“Dawn comes after the darkness.“

Today marks the 201st day of our COVID-19 Pandemic journey. Every week, we always look at the brightness of everything even if it is dark. The State of Kuwait is now experiencing its dark days as the Kuwait Emir passed away.

With the sudden demise of the Kuwait Emir, even they mourn for his death, the State and its ministries continue their work professionally. In fact, Kuwait’s Ministry of Health continues to closely monitor the country’s COVID-19 cases. 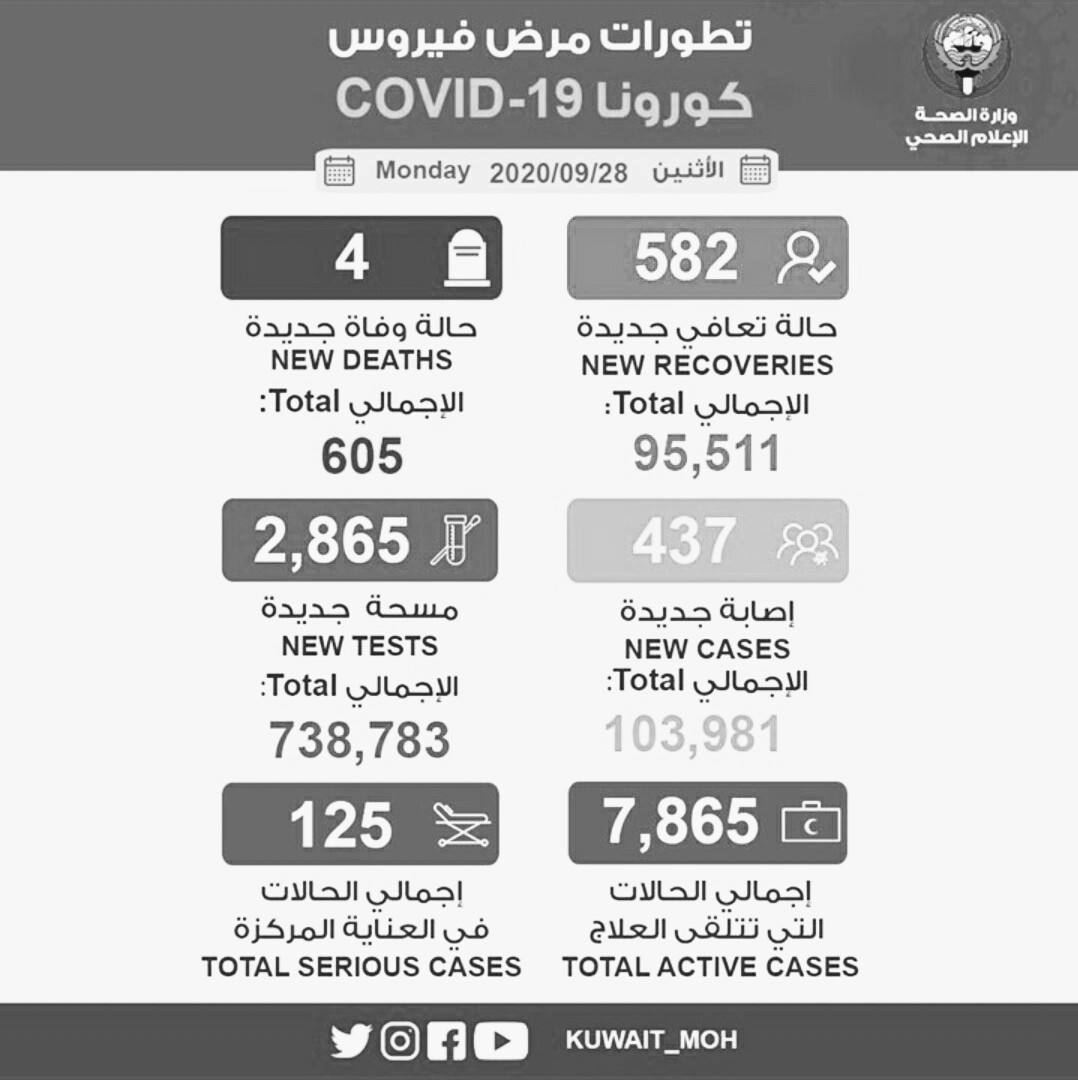 Compared to last week’s data, the total COVID-19 confirmed new cases significantly decreased. However, it is noteworthy to see that there was a decrease in the number of recoveries and a slight increase in total active cases. The total serious COVID-19 cases also increased compared to last week’s data. Unfortunately, we’ve lost four other comrades to the battle against COVID-19. 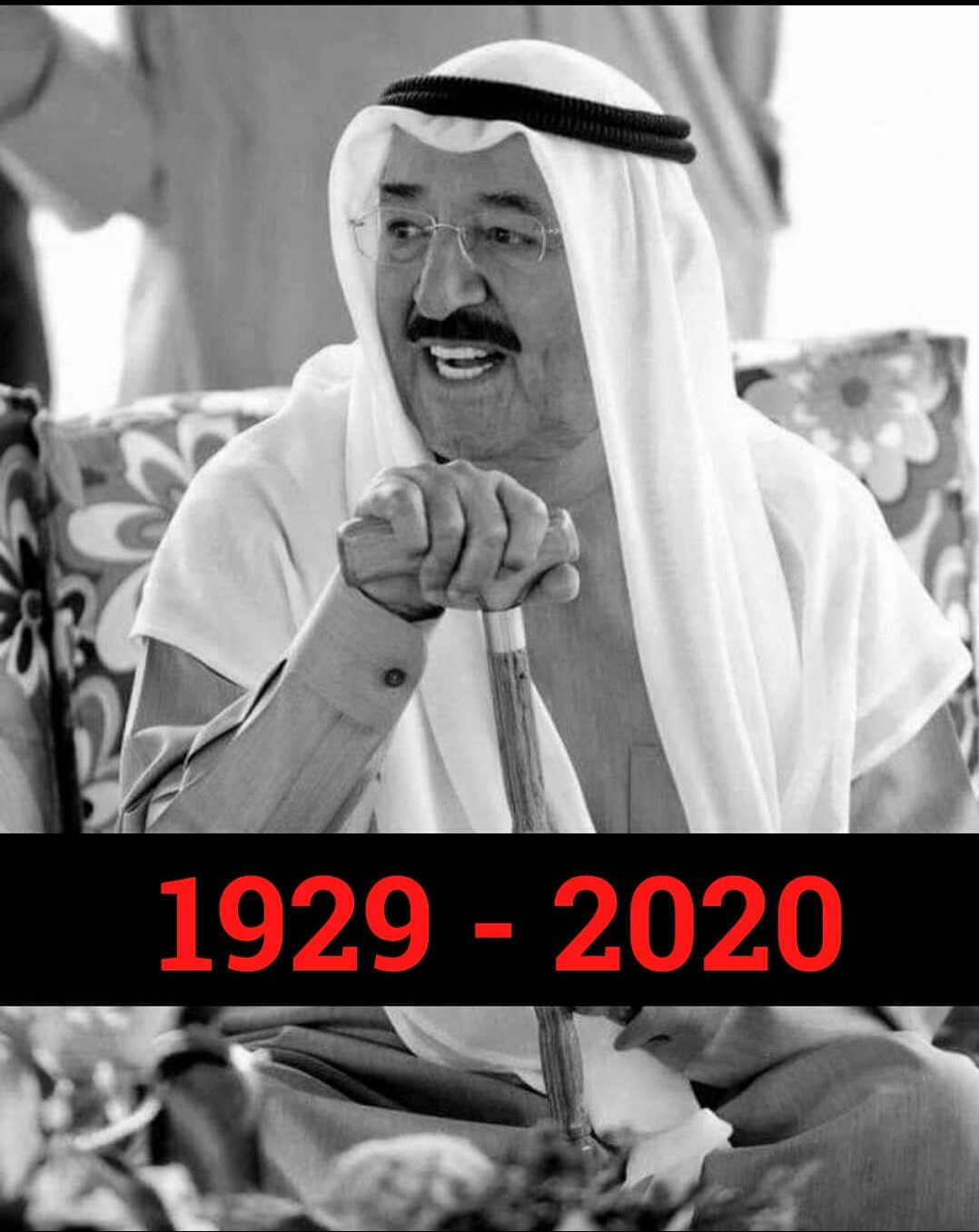 Emir Sheikh Sabah’s death was announced on state television on Tuesday afternoon by Sheikh Ali Jarrah al-Sabah, Minister of Emiri Diwan (Court) Affairs. “With the utmost sadness and grief for the Kuwaiti people, the Islamic and Arab world, and people of friendly nations, the Emiri Diwan mourns the death of Sheikh Sabah al-Ahmed al-Jaber al-Sabah, the Emir of Kuwait, who is now next to God,” he said. Sheikh Jarrah did not provide an explanation for his death.

Emir Sheikh Sabah marks his legacy by ruling Kuwait since 2006 and had overseen its foreign policy for more than 50 years. He was dubbed as the “dean of Arab diplomacy” as he given his efforts to restore relations with states that backed Iraq during the 1990-1991 Gulf War when Kuwait was invaded by Iraqi forces.

The Emir had been a prominent mediator in regional conflicts, such as the ongoing diplomatic spat with Saudi Arabia, its allies, and Qatar. “Today we lost a big brother and a wise and loving leader… who spared no effort for Arab unity,” Jordan’s King Abdullah II wrote on Twitter. 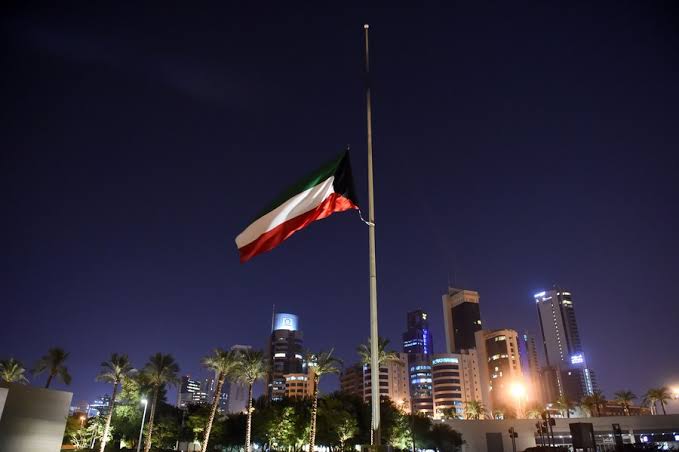 Kuwait’s national flag is flown at half-mast as the state mourns the passing of Kuwait’s reigning Amir, His Highness Sheikh Sabah Al-Ahmad Al-Sabah, on 29 September 2020 in Kuwait City, Kuwait

This photo was taken from: www.xinhuanet.com 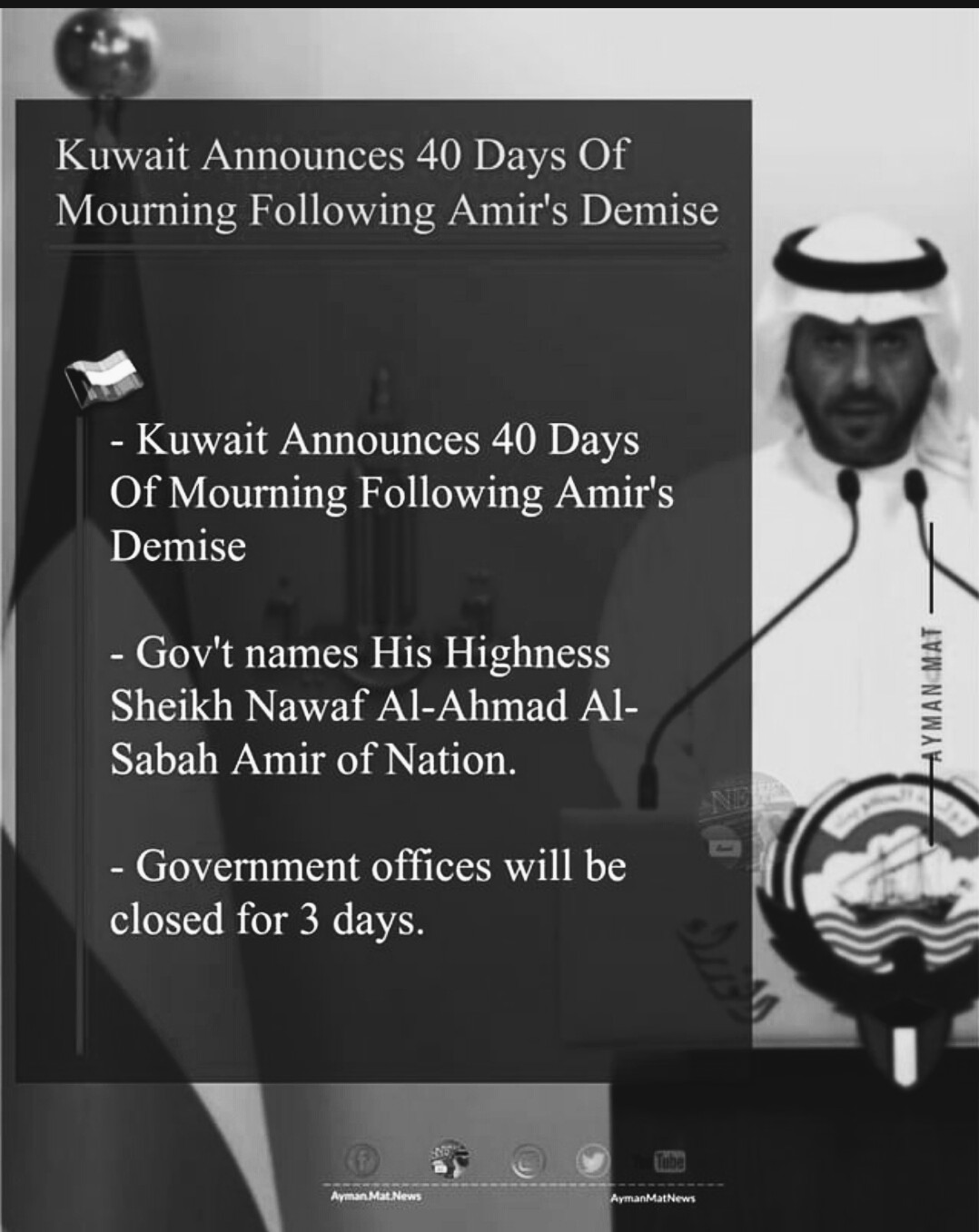 Moreover, in observance of Kuwait’s Emir death, Kuwait Banking Association released an advisory stating that all local banks will be closed until Thursday, 01 October. All local banks will resume their normal operations on Sunday, 04 October 2020. 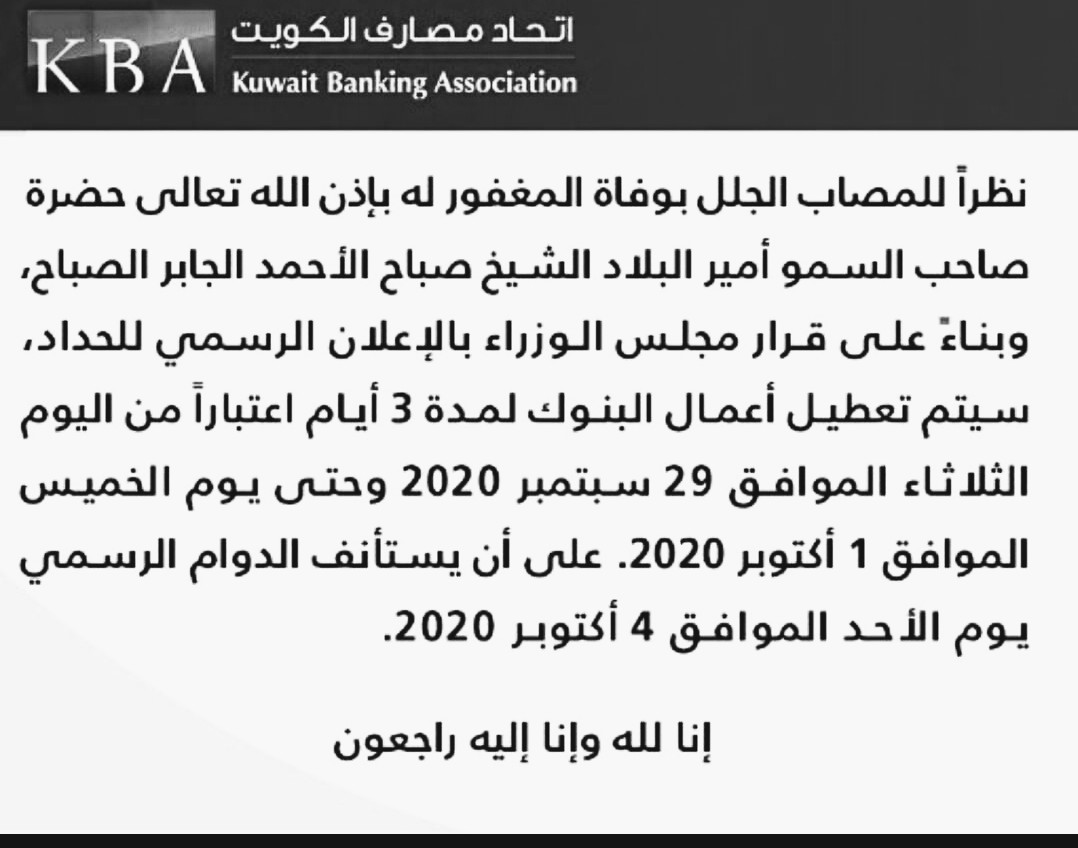 I extend my condolences for the loss of the late Emir’s life. Indeed, the State of Kuwait is now in its dark days as they mourn for the passing of His Highness Emir Sheikh Sabal. Eternal rest grant upon them, O Lord, and let perpetual light shine upon them. May they rest in peace.

Medical workers stranded in Manila clamor to return to Kuwait

The Philippine Embassy in Kuwait is working with Kuwaiti officials to authorize 64 Filipino medical personnel who were employed by Kuwait’s Ministry of Health to return to work. Since Kuwait closed its borders last March and later banned people returning directly from 34 countries, including the Philippines, the medical workers, mostly nurses and laboratory technicians have been stranded outside the country. The 64 medical personnel in Manila are hopeful for a chartered flight from Manila to Kuwait, similar to the flight that brought 116 Indian medical personnel from India to Kuwait late last week. They are ready to comply with the 14-day quarantine upon entry into Kuwait and respond to the mandatory PCR test.

Kuwait already returned 23 nurses from Manila on a chartered flight last 01 August 2020. Betty Nulada, another MoH nurse, is anxious that she will run out of funds before returning to Kuwait. Most nurses stranded overseas had their wages halted in April, whereas others have theirs halted in June. Fortunately, the Philippine Embassy in Kuwait heard the plea of the stranded medical workers from Manila. The Philippine Embassy in Kuwait already sent a note verbale to the Kuwait government expressing its request that Filipino medical workers be immediately allowed to return to Kuwait.

“We are hoping for a favorable decision, which may only come from Kuwait’s Ministry of Health. The embassy strongly believes, especially at a critical time like this pandemic, the return of Filipino medical workers and nurses to Kuwait will bring back the high level of technical expertise and patient care for which they have earned a stellar reputation and profound admiration worldwide,” Vice Consul Charleson Hermusura stated via text message to Kuwait Times.

This photo was taken from: Kuwait Times

Our stranded medical front liners in Manila are hoping for the bright side of everything. That one day, they will come back to Kuwait to continue their work. The decisions of the Kuwaiti government will indicate their fortune if they will have the chance to come back as soon as possible. The dedication of our Filipino medical front-liners is exquisite among others and it is a huge contribution to the health care system of Kuwait to have them back. Just remain hopeful and look on the brighter side as we wait for Kuwait’s decision regarding this matter.

The Ministry of Interior has stopped the issuance of new driver’s licenses to nurses and international students. While the Interior Ministry has not indicated a reason for its decision, it is believed to be part of an effort by the government to minimize the number of new drivers on Kuwaiti roads to lessen traffic congestion.

Nurses and expat students that already have a driver’s license will be able to renew if they bring a certificate of registration from their university of Public Authority from Applied Education, and nurses from the Health Ministry or their current employer in the medical field, as per the Interior Ministry.

This news only aims to decongest Kuwaiti roads to have a faster travel time that is essential amidst the COVID-19 Pandemic. Through decongested roads, health emergencies and deliveries of essential goods will have a faster travel time. This will also help to stimulate the economy of the state. Alongside with it, it also aims to promote the general public to take public transport or switch to alternative modes of travel that will consequently help to reduce carbon dioxide emission. 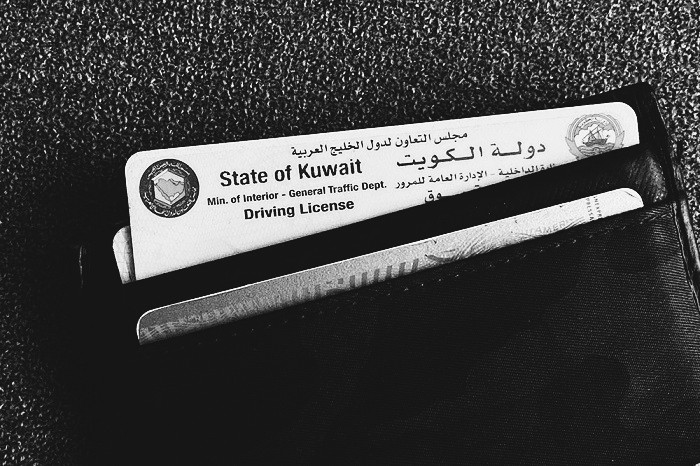 This photo was taken from: Kuwait Times

Updates from the Philippine Embassy in Kuwait 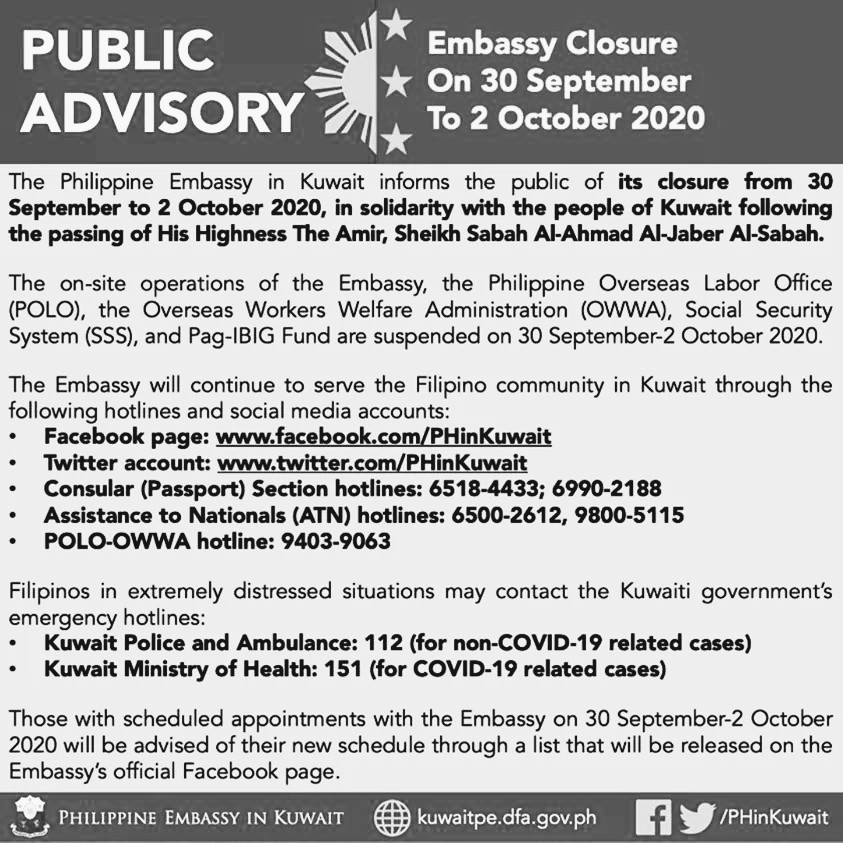 This photo was taken from: Facebook: Philippine Embassy in Kuwait

The Philippine Embassy in Kuwait released a public advisory advising the public that the embassy will be closed from 30 September to 02 October 2020 in observance of Kuwait Emir Sheik Sabah’s demise. All on-site operations of the embassy will be suspended. Those who have scheduled appointments will be rescheduled. Keep updated with the new schedules on the Embassy’s official Facebook page. 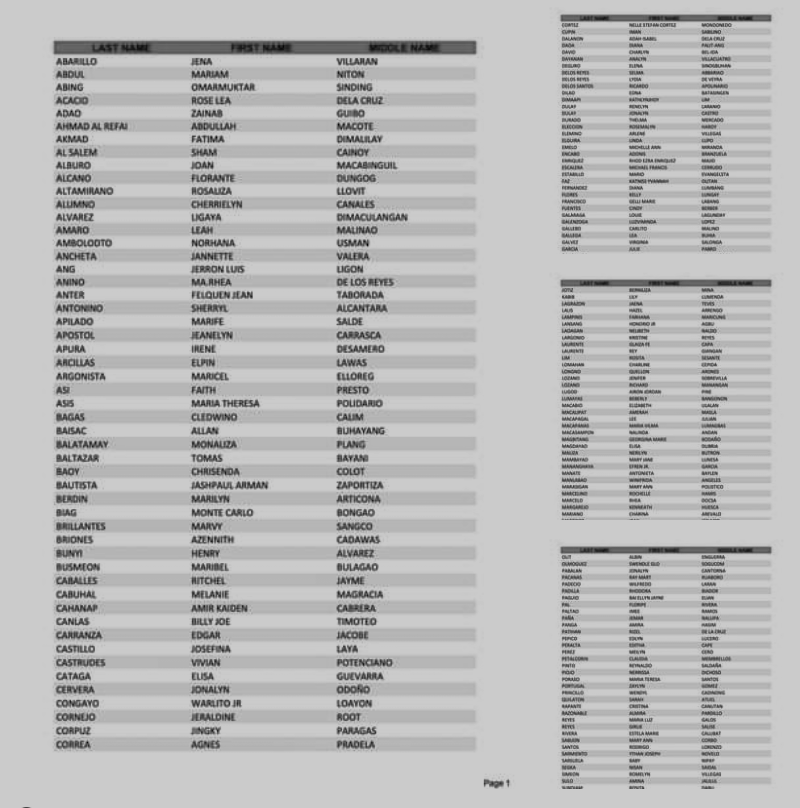 Furthermore, the Philippine Embassy in Kuwait announced that appointment slots for non-passport services are now available for the date 04-08 October 2020. You may refer to the infographics below for further details. 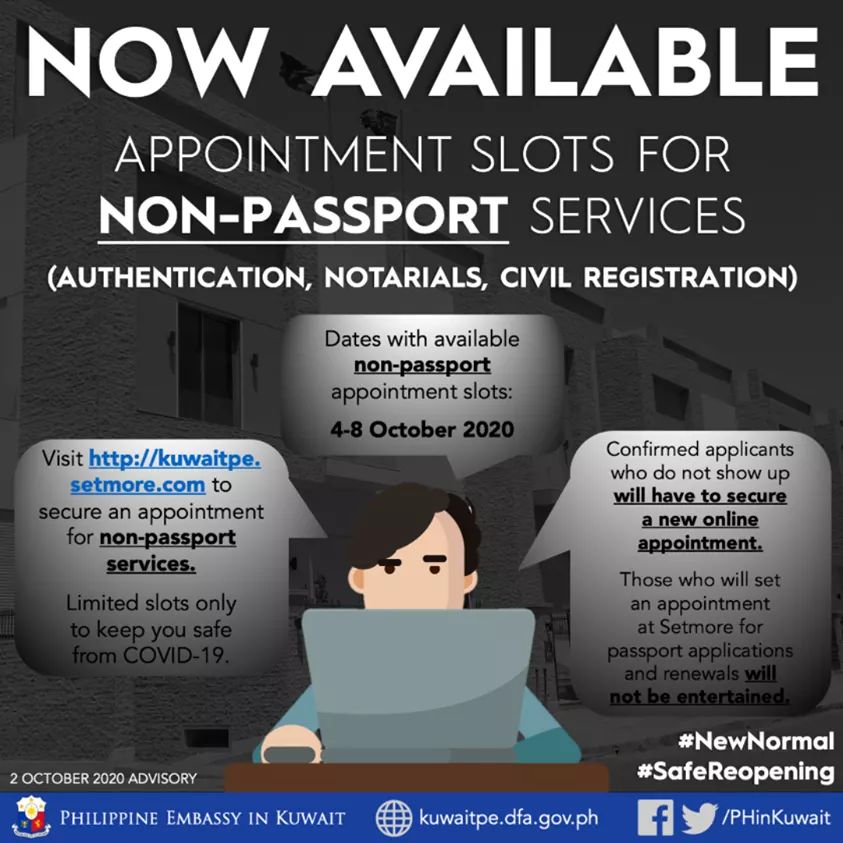 This photo was taken from: Facebook: Philippine Embassy in Kuwait

Last week, we featured that some Western European countries are experiencing a COVID-19 resurgence in their number of confirmed cases. In today’s week, some countries are also experiencing the same case scenario. A spike in virus cases has been reported in New York City, which is a concerning sign as the city takes big steps toward restarting public life. On Tuesday, the city’s daily positivity rate hit 3.25 percent, the highest rate since June.

My Trusted Page of References for COVID-19 Diaries

The Primary Purpose of my COVID-19 Diaries

If you like this article please share and love my page DIARYNIGRACIA PAGE. Questions, suggestions, send me at [email protected]

Peace and love to you.